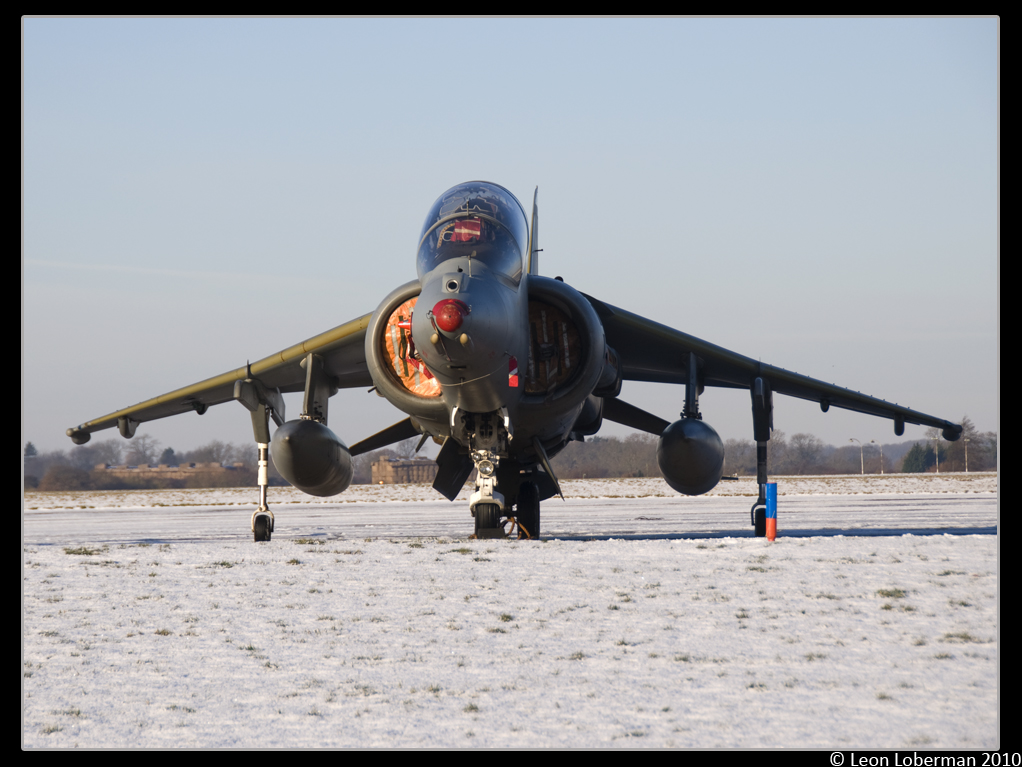 In the 2010 Strategic Defence Review, the decision was taken to retire the BAe Harrier from service with the RAF. The two remaining Harrier bases, RAF Wittering in Cambridgeshire and RAF Cottesmore in Rutland would cease flying operations in December 2010.
I was fortunate enough to one of a select few invited to visit RAF Cottesmore on December 9th, on a visit to view the Harrier before the retirement. Due to weather conditions following the early snow and ice, the station was on a ‘black’ status, which indicated that there was to be no flying that day. Nevertheless we were made very welcome by Sqn Ldr Ruth Davies (SATCO), Flt Lt Kate Read and Lt Jim Dale (RN).

We were given access to the flight pan, as well as the 800NAS and 1 Squadron hangars, with freedom to take photographs of (almost) anything – the only restrictions were no photos of any open nose cones or cockpits where there was power enabled. The snow on the ground gave us the chance to take some really unique images of the Harriers.

As soon as it was confirmed that there would be no flying at Cottesmore but that there was flying scheduled at RAF Wittering, just a few miles back down the A1, Lt Dale got on the phone and made arrangements for us to have base access best replica watches there, under his stewardship.

Once again, we were afforded excellent access and were able to watch and photograph the 7 Harriers which were flying that day from the apron and edges of the taxiways, thanks again to LT Dale who spent his entire afternoon with us.

As I hope you can see from the images, it was a truly memorable but sad day, witnessing some of the last sorties for the Harrier, in almost perfect light conditions – a day to be treasured.