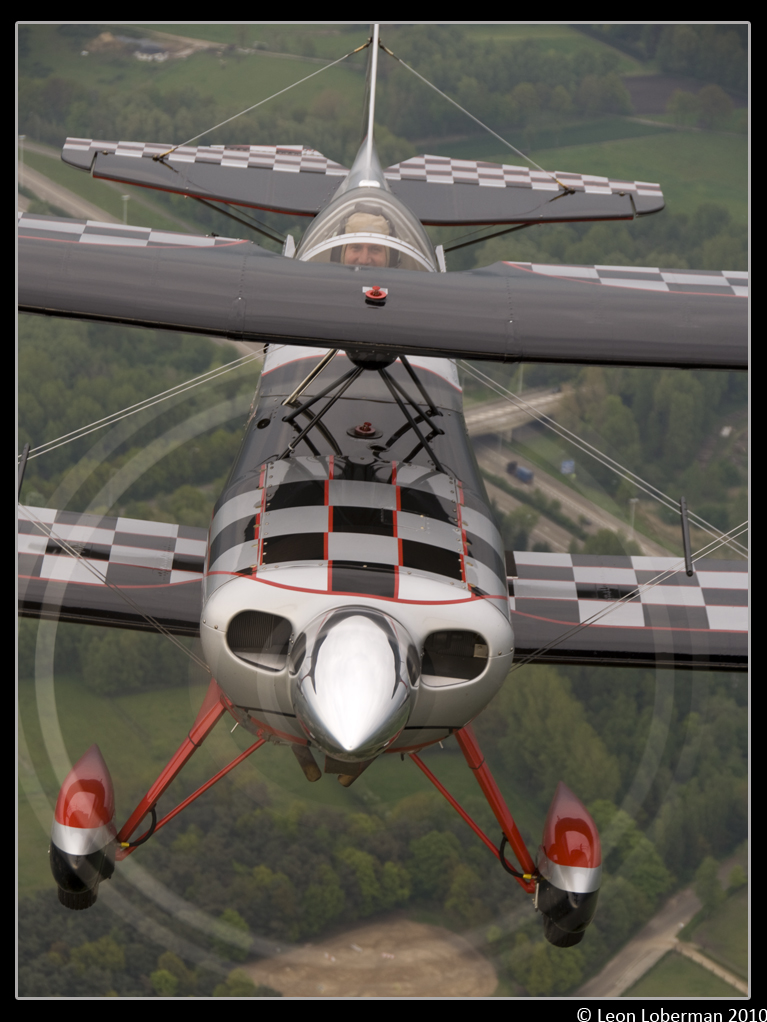 May 14, 2010 – a unique and exciting day in my chosen hobby – I participated in the first ever Air-2-Air Academy organised by Eric Coeckelberghs and his Photocrew.

Eric is well known in both enthusiast circles and the commercial world for his outstanding work in air to air photography and many of his photos have been featured in magazines, used by companies to promote their aviation related products, as well as generally admired by aviation photographers around the world.

With support from Invicta Aviation Limited and their Skyvan G-BEOL, Eric co-ordinated with the organisers and participating pilots of the Chipmeet at Zoersel Airbase (EBZR), about 35km from Antwerp, to provide an opportunity not often afforded to photographers – a chance to have a go at some air to air photography. Over 4 days, from May 13 to May 16, Eric was able to offer this unique experience to over 120 enthusiasts from around the world. Zoersel is a reserve airbase for the Belgian Air Force, with a thriving gliding and private flying community.

The day started with a session at the local community center, where some of Eric’s colleagues, known as the ‘Photocrew’, gave us some lectures with information about tips and tricks, safety and their experience so far. We then ferried back to airfield and eagerly awaited our slot, all hoping the weather would be kind. The previous day there had only been 1 Skyvan flight in the evening because of low cloud but today the weather had improved slightly and all 3 scheduled flights were expected to operate.

Eric was very clear to everyone involved – obey the rules, don’t complain if your flight is delayed or cancelled becuase of the weather, don’t moan if a particular aircraft does not formate with the Skyvan and above all else, enjoy the day!

I was on flight 2, which had a planned departure slot of between 5.00pm and 7.00pm. My position on the aircraft was no. 1 – that meant I was sitting cross-legged at the rear of the aircaft on the left hand side looking rearwards, along with Michael the Flight Director in the centre spot (no. 2), as well as another photographer on the right (spot 3). Behind us, kneeling on the floor were spots 4 and 5, standing behind them were 6 and 7 and then finally on a small step at the rear of the team (but nearest the front of the aircraft) were spots 8 and 9. Everything was carefully arranged so that each person had as clear a view as possible through the open cargo door at the rear.

Everyone was strapped in and we had a clear safety briefing from Michael and the other Photocrew members about what to do in case of emergency. Each participant had a full harness and their cameras were looped around the webbing – no loose objects were allowed, especially lens caps and sun hoods – they can cause a incident if they happen to fall out, not least someone on the ground, never mind a closely formating aircraft! We had also been instructed that memory card, battery or lens changing was prohibited on the flight – so careful preparation was made by one and all. The good news was that in the morning sessions, the Photocrew team had made it quite clear that a 24-105mm lens would probably be sufficient, although sometimes people also used a 70-200mm, even though the vibration on the Skyvan may make this a little difficult to handhold successfully.

At 5.15pm, the Skyvan started up and taxied to runway 05 for departure. Lined up right behind us was a Gyroflug SC-01 Speed Canard, which later proved to be our first subject. We climbed away to about 2000 feet below a maostly overcast sky to the East of the airfield and waited whilst the Gyroflug caught up and began the formation flying in a flat 8 – the sun did try and make an appearance at times but mostly it was a cloudy setting. Very quickly I realised that I didn’t have time to stop and admire the close formation flying if I wanted to get my photographs, so the motor drive on my camera began clicking away in earnest, in company with 8 others on the aircraft! After the Gyroflug came a pair of Yak-18’s, followed by a formation of four Falco F-8s, a pair of Mooneys and finally a Pitts S-2C with an Extra 300L. All too soon (but not rolex replica paypal for my knees, sitting cross-legged on the Skyvan floor), after about an hour of exhilarating time in the air, we headed back to Zoersel to land and taxi back to our parking spot, taking the opportunity to look through the shots we had taken – no time for the photographer two-step in the air! (The photographer two-step by the way is that well known phenomenon with digital cameras users worldwide – Step1 – Take a photograph (or 2), Step 2 – look down at the back of the camera and admire your work, at the same time missing that unique photo).

All in all I was pleased with my results for a first effort – not perfect but certainly not too shabby – and after a little bit of work on the computer, it even looks like there was some sunshine!

My thanks to the following people for organising a fantastic day – I can’t wait for the next one!: